Acclaimed Dutch Saxophonist Tineke Postma to Showcase New CD "The Traveller" at the Blue in NYC Monday February 22 at 8 & 10:30 P.M. 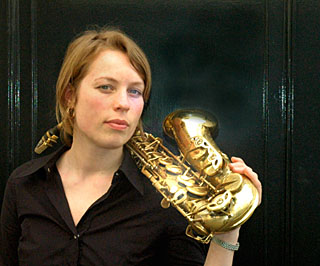 “The Traveller," Postma's fourth album as a leader was released in the U.S. on January 12, 2010 and is unquestionably her most impressive recording to date, showcasing her skills as a composer as well as an instrumentalist on eight original songs and her arrangement of part of a Heitor Villa-Lobos string quartet. The CD, which features Carrington, Colley and pianist Geri Allen, has already garnered glowing reviews and is currently #2 on the CMJ Jazz Top-40 Chart and #22 on the JazzWeek Top-50 Chart.

Writing in All About Jazz, David Adler observes that “...the young saxophonist leads a top- tier American lineup [and] far from being overwhelmed holds her ground and even challenges the band with a set of strong material...On 'The Traveller" we hear the sound of an artist breaking through to the next level." In his review in JazzTimes Thomas Conrad writes “Tineke Postma's chops are right there with the best alto/soprano saxophonists who have emerged in the new millennium. But she is only occasionally interested in showing off her technique. 'The Traveller' is about crafting compositions, arrangements and concepts into a complete, balanced album statement."

Tineke Postma has, in a few short years, built up a global following through touring and performing in clubs and at festivals in over 20 countries. She fulfilled the promise of the title of her 2007 release A Journey That Matters that received rave reviews in DownBeat, JazzTimes and other influential publications and significantly raised her profile across the Atlantic from her home in the Netherlands.

Postma is the only Dutch artist featured along with Wayne Shorter, Herbie Hancock and other legends in the critically acclaimed four-part documentary “Icons Among Us - Jazz In The Present Tense" showcasing veteran and rising jazz artists that premiered on The Documentary Channel in April 2009.

She also has the distinction of being the first European jazz musician signed by the respected American talent agency IMN (International Music Network) joining an illustrious roster of saxophonists including Shorter, Joe Lovano, Joshua Redman, Chris Potter and Maceo Parker as well as other renowned artists like McCoy Tyner, Dianne Reeves, Dave Holland and Brad Mehldau.

These are two of several highlights during a landmark year for the 31-year-old Amsterdam-based Postma during which she also won the coveted Revelations Award, the Jury Prize and the Audience Prize at the 49th Antibes Juan-Les-Pins Jazz Festival in France and was a finalist for the prestigious Paul Acket Award at the North Sea Jazz Festival. Postma ended 2009 on a high note, with an appearance in November at Zankel Hall in New York as a member of bassist and vocalist Esperanza Spalding's quartet, having previously performed with Spalding's band in July at the North Sea festival.

Born in Heerenveen, The Netherlands, on August 31, 1978, Postma earned an M.A. with honors from the Amsterdam Conservatory in 2003 where she currently teaches and then received two scholarships to attend the Manhattan School of Music in New York, where she studied with Dick Oatts, David Liebman and Chris Potter. Among Postma's honors are the international Sisters In Jazz All-Star Award, the Singer Laren Jazz Award, the Heijmans Award and the distinguished MIDEM International Jazz Rvlation of the Year award in 2006 during a French National TV gala broadcast “Victoires du Jazz."