Her name is Sinne Eeg, and she can sing a standard like it's a holy experience. --Carol Banks Weber, AXS 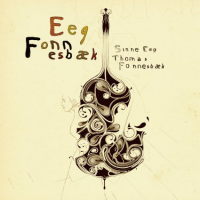 “The name—Sinne Eeg (sēe-neh · ēe)—may be hard to remember, at first. But anyone who listens to her album, The Beauty of Sadness, as well as her similarly appealing Don’t Be Blue, or hears her in live performance will have no difficulty recalling either the name or the unforgettable music of this remarkable artist. If there’s any justice in the world, Grammy nominations will be beckoning to Sinne in 2013 and beyond.” &#151Don Heckman, International Review of Music

Sinne Eeg’s distinctive vocals have earned her a loyal and rapidly growing fan base in her native country of Denmark and around the world. Considered the preeminent jazz vocalist in Scandinavia, Sinne has already made her mark in Japan, China, and throughout Europe with her exquisite live performances and award-winning studio recordings.

Although she has released seven albums to wide acclaim in Europe and Japan, the depth and beauty of Sinne’s artistry has largely been a secret here in the U.S. until her recent live performances, where she has mesmerized audiences on her tours throughout the West Coast and Southwest. Now, with the release of Eeg-Fonnesbaek, her first CD to be introduced to a wide U.S. audience, jazz lovers throughout North America will be able to experience one of the finest vocalists to come along since Sarah Vaughan and Carmen McRae.

A duo album recorded only with bass as accompaniment, Eeg-Fonnesbaek pairs Sinne with Thomas Fonnesbæk, an award winning, in- demand Danish bassist who has appeared on more than 100 CDs. Purposely intended to feature Sinne in an open and bare setting and as a departure from her previous lush recordings, including Beauty of Sadness (2012, featuring Peter Erskine and the Danish Symphony Orchestra), Don’t Be So Blue (2010), and Waiting for Dawn (2007), Eeg-Fonnesbaek follows directly on the heels of 2014’s Face the Music, which garnered a Danish Music Award (Denmark’s Grammy) for Best Jazz Vocal CD and the prestigious Ben Webster Prize, for which Sinne was the sole female recipient. Additionally In 2015, the Academie du Jazz (France’s top 60 critics) honored Face the Music with one of Europe’s most distinguished awards.

As Sinne says, “I always loved singing duo with bass. I’ve done that since my first CD from 2003, and I always do it live in my concerts. It’s just a sound that I like very much. Thomas and I have been working together on and off through the years — he’s just an amazing musician, and he and I communicate very well musically. I feel so comfortable with the bass and voice sound and I also find it so challenging, that I become better every time I sing with him. When you push yourself, that’s where the magic can happen. I really believed that we could do something interesting enough for a whole album, instead of just a feature.”

The number of vocal/bass duo recordings is quite small. EEG- FONNESBÆK stands easily with the best of Sheila Jordan’s duet albums with Harvie S, Steve Swallow, and Cameron Brown. The album comprises seven tunes from the Great American Songbook and two originals, including “Fellini’s Waltz” with lyrics by Lorraine Feather and music by the great Italian pianist and composer Enrico Pianunzi, and “Taking It Slow,” by Thomas Fonnesbæk and Helle Hansen.

Right from the opening track, “Willow Weep for Me,” you can hear how their harmonic sensibilities play off each other, creating a rich emotive tapestry and full sound despite the absence of other instrumentation. They take the limitations of the duo format and turn it into an opportunity for greater creative freedom and self- expression that only musicians with great skills and empathy can achieve.

But that’s always been Sinne’s modus operandi. Although she’s firmly rooted in the traditions of the great jazz vocalists, Sinne is an artist who never settles for past modalities. Rather, she prefers to push herself into new territories in her recordings and live performances. She is also a prolific songwriter. Although her other albums featured Sinne’s catchy originals, Eeg-Fonnesbaek focuses mostly on standards, like “You Don’t Know What Love Is,” “Body and Soul,” “Summertime,” “Beautiful Love,” and “Come Rain Or Shine.” Eeg manages to keep the essence of these chestnuts while taking them to new and fresh places that are imbued with her own personality and sensibilities. Her humor is apparent on the Lionel Hampton/Leonard Feather “Evil Gal Blues,” which Sinne sings convincingly despite her claim that she included it because “I thought singing I’m an evil girl was so ironic and ridiculous.”

Sinne’s voice has a lush timbre that marries perfectly with Fonnesbæk’s warm bass sound. As a singer she is influenced by Nancy Wilson, Betty Carter and Sarah Vaughan, but adds her own personal touch of soft darkness influenced by Scandinavian melancholy. Even without a drummer to keep time or a pianist to play chords, Sinne retains all her artistry and interpretive powers. Eeg and Fonnesbæk listen intensely and inspire each other to take chances. But spontaneity, communication and interpretation is, after all, the essence of jazz. The two are like dancers who are finely tuned and responsive to each other’s every gesture. The results are simply captivating.

Sinne was raised in the Danish countryside in a very musical family. Her father, a physician, also plays bass, while her mother is a singer and clarinetist. Her brother plays the sax, and her uncle is a multi-instrumentalist. There was always jazz and jazz musicians in her house, so of course it was only natural that she began playing music at the age of four. However, she didn’t become serious about music until she was 16, when she decided to pursue it as a career. With the intention of studying at the highly competitive Danish Music Conservatory, Sinne first studied at a music preparatory school just to be good enough to audition for the Academy. She attended the Academy for six years studying jazz vocals. Coursework at the Academy is very rigorous and gave her the deep understanding of music and superb harmonic and rhythmic techniques that shape her performances today. After school, she began performing in small cafes and casuals, building her reputation and fan base. The world started taking serious notice of her in 2007 with the release of her second CD, Waiting for Dawn, and her acclaim has been growing ever since.

The international jazz community has embraced this remarkable Danish jazz vocalist. Now, with the U.S. release of Eeg-Fonnesbaek, Sinne Eeg is poised for a North American breakout.