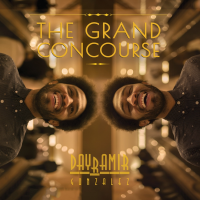 slideshow
Born and raised in Havana, Cuba, pianist Dayramir (DY-ruh-meer) Gonzalez has come into his own as a New York City based artist/composer and bold musical force with his bountiful U.S. debut The Grand Concourse EP to be released digitally July 21st on Machat Music/Orchard.

The gifted artist dons multiple hats on The Grand Concourse EP, enthusiastically succeeding as composer, arranger, orchestrator, bandleader, and more leading a dynamic array of musical assemblages, including string quartet, full orchestra, solo piano and Afro Cuban jazz septet. Whether it’s the appealing textures of the jazz-flecked “Smiling,” which Dayramir says “is a harmonious blend of a lot of the sonic elements of the album,” or the more hypnotic “Situaciones en 12/8,” with its fundamental groove evolving from West African musical tradition, or “Iyesa Con Miel,” dedicated to Oshun, one of the most powerful deities’ of the Yoruba pantheon, Dayramir sets his compass for a modern and timeless confluence of sound. (full EP track listing below)

Dayramir’s journey may have begun in Cuba, but there’s been no shortage of mileposts lighting his diverse path. He was accepted into Cuba’s famed National High School For the Arts (ENA) and while still in school, was recruited by Cuban legend Giraldo Piloto to join Klimax, helping to shape the sound of that renowned group. In 2005 he won first place in Havana’s JoJazz festival in the composition category, winning a record deal with Cuba’s national label Colibri. He recorded his first album, released in Cuba in 2007, titled Habana enTRANCE, displaying his skills as artist, bandleader, and composer. The album would go on to win three Cubadisco awards, considered the Grammys of Cuba.

Dayramir was accepted into Havana’s prestigious Instituto Superior de Arte (ISA) where he strengthened his burgeoning composition skills under the tutelage of master Juan Pinera. Next, he was awarded a musical scholarship to Boston’s revered Berklee College of Music in the U.S., becoming the first Cuban national to receive Berklee’s coveted full Presidential Scholarship. In 2012, he was called “a rising star in the Latin jazz world,” by Carnegie Hall and personally selected by Chucho Valdes to represent the young generation of Cuban Jazz at Carnegie Hall’s “Voices of Latin America.” Dayramir graduated Summa Cum Laude in 2013 and received the Wayne Shorter award for Most Outstanding Composer of the Year upon graduation

The vibrant The Grand Concourse EP embraces the pulse and mystique of New York City, as well as the allure of early 20th century Cuban sonic leanings and the cultural roots and myths of sensually fused Yoruba religious elements (Cuban-centric Yoruba beliefs identify both natural and spiritual characteristics as part of its foundation) elevated by Dayramir’s 21st century precision.

This story appears courtesy of Tracey Miller and Associates.
Copyright © 2020. All rights reserved.