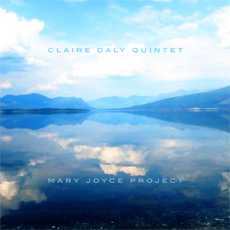 Claire Daly, whose new CD, The Mary Joyce Project: Nothing to Lose, will be released in September, will join frequent collaborator Kirpal Gordon for two performances that explore the fusion of jazz and literature. At the first of the two upstate shows, at 4 P.M. on August 13, Daly will perform in Gordon's Speak-Spake-Spoke band at the College of Poetry in Warwick. Joining Daly and Gordon will be Arthur Kell on bass and Carlton Holmes on piano.

The afternoon's first set will feature material from Gordon's latest book of fiction, Ghost & Ganga: A Jazz Odyssey, wrapped around the music of Billie Holiday, Miles Davis, James Brown and Louis Armstrong. The second set will highlight work from Gordon's Eros and Sanskrit: Lyrics and Meditations 2007-1977 and its accompanying CD, Speak-Spake-Spoke. Since all three band members are excellent composers in their own right, they will also perform some of their original tunes.

The College of Poetry is located at 7 West Street in Warwick, in the room behind Utopian Direction Books and Art. Admission is free.

On August 20, Daly and Gordon will join with poet and musician Barry Wallenstein, composer/guitarist Steve Carlin, and bassist Tony DeCicco for “An Evening of Poetry and Jazz" at the Liberty Free Theatre.

Liberty Free Theatre is located at 109 Main Street in Liberty.

In September, Daly, will release The Mary Joyce Project: Nothing to Lose, a musical homage to her father's first cousin, Mary Joyce. An adventurous pioneer who, in 1935-36 was the first non-native to make the 1,000 mile dogsled journey from Juneau to Fairbanks, Joyce's story of her three month journey is an amazing tale of determination, adventure, risk-taking, and fortitude. On Nothing to Lose, Daly and pianist Steve Hudson composed music inspired by Joyce's written journal of the trip. They, along with bassist Mary Ann McSweeney, drummer Peter Grant, and human beat box extraordinaire Napoleon Maddox, have created a musical tribute to honor an adventurous woman who lived life to the fullest.

The Mary Joyce Project: Nothing to Lose includes eleven original tracks&#151Daly wrote three songs, collaborated with Hudson on four, and the remaining four tracks were contributed by Hudson, whose understanding of the spirit of the work matches Daly's own. Elements of Mary's life in Alaska resonate throughout the project—the hand drum played by Peter Grant on the CD's opening track, “Guidance," was purchased in Juneau. The photo on the CD's cover was taken by Daly at Kluane Lake, which Mary crossed by dogsled.

Daly is a six-time winner of the Downbeat Critics Poll and winner of the Jazz Journalists Association “Baritone Saxophone Player of the Year" award (for 2005). She was nominated again in that category this year. The Mary Joyce Project: Nothing to Lose is her third release as a leader, and she has also recorded 5 CDs with composer/pianist Joel Forrester and their band, People Like Us.