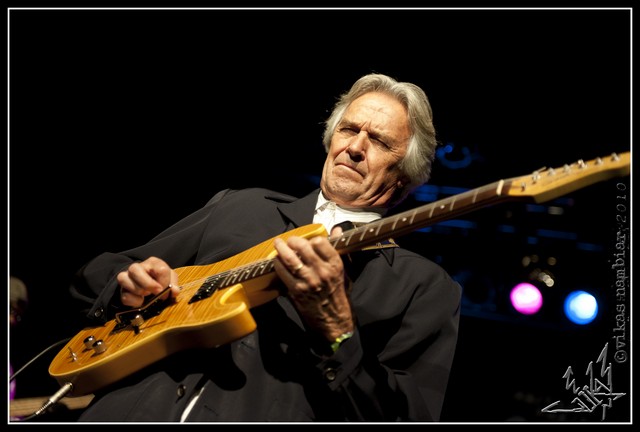 “I feel honored to participate," says festival headliner John McLaughlin, while on tour promoting his Grammy-nominated album To the One. “My life has been dedicated to my instrument and music, and I continue to devote myself to music in order to be worthy of such a privilege. You will hear the kind of complicity that exists between us all—this is a very special element, and frankly essential for making good music."

Jimmy Herring very succinctly put it, “This is real music played by real people, happening in real time. We're up there listening and reacting to one another, and people genuinely respond to the risks we take. This is human music in a mechanized age."

A 2 DVD Set of the festival, with additional performances including an All Star Tribute to John McLaughlin, interviews, and other bonus features will be released on September 20, 2011.

Watch out for the next incarnation of the New Universe Music Festival in 2012.

“The New Universe Music Festival brought together an astonishing roster of legendary and upcoming jazz-fusion musicians-especially guitarists-in an intimate setting charged with excitement. As might be expected, the music was superb, culminating in a heartfelt tribute to fusion and world music pioneer John McLaughlin. I look forward to attending the next NUMF, though the first one will be very tough to top." &#151Barry Cleveland, Guitar Player

JazzTimes editor Lee Mergner attended the festival, observing, “It was a veritable smorgasbord of fusion, with many of the top-notch artists in the genre coming together for a series of performances. Jazz-rock fans attending the inaugural event heard legends like John McLaughlin and Lenny White, established names such as Wayne Krantz, Human Element and Jimmy Herring, as well as up-and-comers like Alex Machacek and Ranjit Barot. From start to finish, the music was electric, even when it was being played acoustically. There was also a palpable sense of community as artists generously participated in listening sessions and sat in with each other throughout the event. I highly recommend this festival and look forward to seeing and hearing its second incarnation in 2012."

With its early beginnings in 1972, the Godin Guitar family now includes 6 lines of guitars. These include the renowned Godin electric line, as well as the finely crafted acoustic lines such as Seagull, Simon & Patrick, Norman, Art & Lutherie and LaPatrie nylon stringed classical guitars. Godin Guitars is also the manufacturer of the revolutionary TRIC acoustic guitar case. Based in Montreal Quebec, this Canadian company has 6 factories, 5 of which are located in the Eastern Townships of Quebec and 1 located in Berlin New Hampshire.