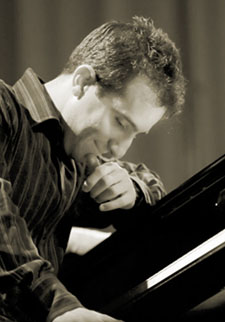 slideshow
When pianist Aaron Goldberg set out to do this record, he wanted to mix things up with the compositions and arrangement, and so he called in Argentinian composer, arranger and fellow pianist Guillermo Klein to take the lead in those departments.

Klein, who is fast getting a reputation of being a sort of Gil Evans of Argentina, brings his orchestral sensibilities to Aaron Goldberg and his small combo consisting of Matt Penman (bass) and Eric Harland (drums). Miguel Zenon (alto sax) and Chris Cheek (tenor sax) supplement the group on some tracks, and Klein himself supplies a Fender Rhodes here and there. But Goldberg as featured soloist mean Klein's main role is as the arranger and composer for eight of the thirteen songs.

Even on the covers, Klein weaves in his magic: when I first heard Charlie Parker's “Moose The Mooche," I thought there was a glitch on the CD making it randomly skip through or speed up the pace; no, that's Klein's crafty arrangement, and an amazing ability by Harland and Penmen to know just how much for speed up and slow down at the right times.

Klein does that for another Parker tune, “Blues For Alice." “Human Feel" layers in these repeating figures in such a creative way, you'd swear there are twelve people playing on it instead of six. The ballads like “Anita" (video below) reveal Klein's gift for building memorable, ethereal melodies. There are two tracks that are piano/electric piano duets between Goldberg and Klein, the leftovers from a discarded idea to make this an album full of these one-on-one encounters.

Though both these Klein tunes “Implacable" and “Airport Fugue" hold some interest, I think the right call was made to employ the small group for most of the record, which enabled Klein to tap deeper into his deep creative well. In Goldberg he found a good agent for carrying out his vision: Goldberg does not overplay and stays very attuned to the harmonic construction of a song, no matter how challenging Klein makes it.

This new album is a two-man collaboration of a different sort, and it's that different approach that makes it stand out. In a very good way, I might add. Bienestan released June 14, on Sunnyside Records.