Together, the Freemans managed to embody the entire sound of Chicago, creating music that runs the gamut from bar-walking blues to bop, far-out to funky, and tradition-minded to Afro-Futuristic. —Dan Bilawsky, All About Jazz 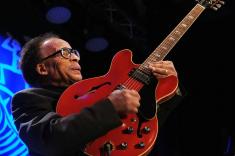 slideshow
Southport Records and Lampkin Music Group presents: “A Toast to George Freeman"- Special Guest Billy Branch, with Joanie Pallatto and Sparrow on April 28, 2018 This is a general admission seated event. Tickets are $10 in advance and $12 on the day of the show. Media Sponsor: The WFMT Radio Network's Jazz Network.

George Freeman is the current living warrior of sound, the Mad Max of the 6-string guitar.

“Together, the Freemans managed to embody the entire sound of Chicago, creating music that runs the gamut from bar-walking blues to bop, far-out to funky, and tradition-minded to Afro-Futuristic." —Dan Bilawsky, All About Jazz

Blues Harmonca and singer Billy Branch is an ambassador of the Chicago Blues. Playing a signature and award- winning sound on his searing harmonica and singing deep from his soul, Billy Branch leads his long-time Chicago-based band, Sons of Blues and their Authentic Chicago Blues to a world-wide audience. As a 3 Time Grammy Nominee, he served two consecutive terms on the Grammy Board of Governors, and founded the Grammy Blues Committee. His internationally recognized “Blues in Schools Program" is committed to teaching both young and old about the Blues as the roots of America's music.

Having just returned from China—"Billy on the China Road" followed by a trip to Memphis as a judge at the International Blues Challenge alongside Little Steven Van Zandt [of the Bruce Springsteen E Street Band], Billy Branch will be continuing his touring with a variety of Chicago gigs, including honoring Little Walter at Buddy Guy's, an early Valentine's Day celebration at Rosa's Lounge, and at FitzGerld's for Tom Marker's Bluesday Tuesday.

Vocalist Joanie Pallatto and Pianist and Composer Bradley Parker- Sparrow claim Chicago as their home- their life in music has blossomed over the decades, along with their marriage. As co-owners of Southport Records and producers and engineers at Sparrow Sound Design Recording Studio, together they have released close to 150 recordings since 1977- mostly of jazz artists, along with cabaret performers and contemporary classical composers.

2017 was a special year for Joanie & Sparrow. They presented “40 Years of Sparrow" for the 2017 Chicago Jazz Festival at Chicago Cultural Center. Two celebrations of Southport Records 40th Anniversary took place- in New York at Pangea on October 23, 2017 with a tribute to jazz legend Bob Dorough, and at the Green Mill in Chicago on November 5, 2017, featuring Chicago jazz pianist Willie Pickens (April 18, 1931- December 12, 2017.) Their new CD release, “Float Out to Sea" brings their unique, original sound to the forefront of jazz and cabaret with their deeply personal “story-songs."

Between them, Joanie Pallatto and Sparrow have released 24 CD's over the last 30 years of their own. These CD's comprise their original songs, written together and apart. As solo performers, or with their duet act, they have appeared in New York at The Iridium and Pangea, and in Chicago at The Green Mill, Davenports, Andy's Jazz Club, The Chicago Jazz Festival, Chicago Cultural Center, The Old Town School of Folk Music, Park West, Stage 773 and Bailiwick Theater. In 1999, Joanie was also a featured soloist with Daniel Barenboim in “Ellington Among Friends" at Symphony Center.

Sparrow has written soundtracks for several films, including films and plays of his own- his one act play “The Silence" was performed and premiered at Navy Pier in 1985, and his three act play “The Bar" received a full reading at Victory Gardens Theatre. “The Last Cabrini" (a Southport Film 2012) premiered at Chicago's CIMMFest 2016- a cinema tone-poem with Rick Kogan, narrator and Joanie Pallatto, voice. Shot, directed, edited and composed by Sparrow.

Multi-Instrumentalist and Singer John Devlin on electric 6-string bass and accordion: Versatile Singer and Guitarist John Devlin hails from Chicago's Clearing neighborhood, and lives in the same house he grew up in.

Drummer and Percussionist Luiz Ewerling on drums and percussion: From Porto Alegre to Chicago- Drummer, Teacher and Composer Luiz Ewerling has been behind a drum kit since his sixth birthday, and carries his Brazilian mastery of rhythm everywhere.

Lampkin Music Group, along with Southport Records presented “A Tribute to Bob Dorough," at Pangea last October; produced the first NY reading of Joanie and Sparrow's musical “AMusical," at Pangea 2016; co-produced the summer series, “The Art of the Song" at Katerina's, 2010 ; and co-produced the “The After Party for Von Freeman" at The Iridium in New York as a salute to NEA Jazz Master Von Freeman in January of 2012, featuring 2012 NEA Jazz Master Sheila Jordan. Joanie & Sparrow performed their original songs, and featured guest vocalists included jazz legend Bob Dorough, Broadway's Bill Nolte and jazz vocalist Martha Lorin.