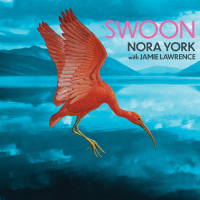 The jazz world lost singer Nora York three years ago when she died from pancreatic cancer at age 60. But her artful, creative and distinctive music lives on. This is a good thing—for us.

Her longtime collaborator Jamie Lawrence, a New York-based pianist, has just released Swoon, a recording of previously unreleased material by York. Four of the songs were written by York. Six others were collaborations by the two of them. Two of York's distinctive pop covers round out the project. They are her very different takes on rock classics: Elvis Presley's “All Shook Up" and Prince's “Nothing Compares to U."

Lawrence produced York's 2005 album What I Want. The singer was filled with ideas for albums and musical theater shows, zigzagging from one artful project to anther. She and Lawrence recorded lots of material, but they never got around to releasing another recording while she was alive.

Her material, as heard on Swoon (Good Mood Records), is very insightful and well-crafted. “In The Morning" describes the ups and downs of someone living an artistic life. “Snowstorm in June," “Earliest Memory" and “Rain Came Down" are about climate change. Her lyrics- and the way she delivers them- make you hang on every word.

York's husband, Jerry Kearns, designed the cover and also worked with Lawrence to select material for this project.

We can expect more of York's insights and wit down the road. Lawrence says the dozen tracks released here are “only some of what we have on the proverbial shelf."