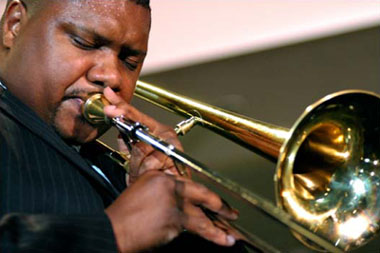 slideshow
Trombonist Wycliffe Gordon is a modern-day ambassador for classic jazz dating back nearly a century. He digs the repertoire and style, putting his own stamp on it whether performing vintage songs or his own newer material.

Gordon, 49, is a Georgia native best known for his work with trumpeter Wynton Marsalis and the Marsalis-led Jazz at Lincoln Center Orchestra since 1989. The multi-instrumentalist has also carved out his own solo career as a bandleader, composer and educator.

More than half of the evening focused on music from the repertoire of trumpeter Louis Armstrong, with Gordon shifting with ease between trombone, trumpet and slide trumpet, and adding his own vocals.

Gordon also wove in a bit of Duke Ellington ("It Don't Mean a Thing If It Ain't Got That Swing" and “In a Mellow Tone"), Dizzy Gillespie ("Ow!") and Thelonious Monk ("Straight No Chaser"). He also debuted a vocal version of the title track from his newest CD, “I Give You Love."

“It Don't Mean a Thing" and Gordon's version of “On The Sunny Side of the Street" both displayed the robust complexities of his trombone artistry. He frequently uses the plunger mute to create a growling tone with very personal, voice-like shading. On the latter tune, he used the growling technique to riff behind the basic melody he was laying down on his solo.

DelGatto, who performed in NBC-TV's Saturday Night Live Band for 25 years, was an excellent foil for Gordon's horn work all night. He also was featured with a beautiful take on the classic jazz tenor ballad “Body and Soul." Early in the second set, Gordon and Delaney teamed up for a soulful trombone and piano version of “Danny Boy."

The Armstrong-related material included Fats Waller's “(What Did I Do To Be So) Black and Blue," “Hello Dolly," “Do You Know What It Means to Miss New Orleans?" and “Just a Closer Walk With Thee."

Then came a rousing New Orleans medley. Gordon had the crowd clapping along to “When The Saints Go Marching In," then weaving in a frisky vocal take on “(I'll Be Glad When You're Dead) You Rascal You." The night wound down with an encore: Armstrong's late-career pop hit “What a Wonderful World."