A Quick Chat with Patti Wicks 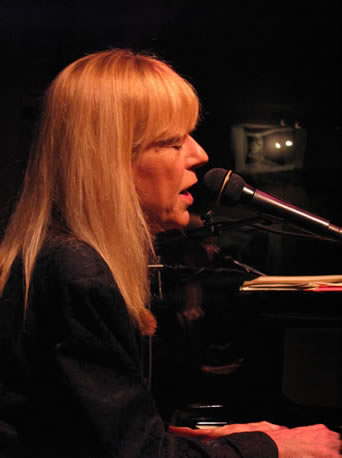 Patti Wicks is a highly regarded jazz pianist and vocalist and international recording artist. She spent over three decades playing in jazz clubs in New York City and also working the East Coast jazz circuit. She has several recordings in her discography and her CD It’s a Good Day received an Italian jazz award for the best jazz album in 2008.

Patti currently resides in Florida and will be appearing at Bake’s Place this weekend with Seattle’s much beloved vocalist Greta Matassa. Patti and I spoke over the phone the other day. Here are a few bits and pieces from that conversation.

You just got back from a trip to New York City. What did you do there?

I played five nights at the Metropolitan Room, on 22nd between 5th and 6th. The room has only been open 2 or 3 years. I have a wonderful bassist I work with when I’m there. Linc Milliman. Great player.

You’re heading up here to the Northwest to play at Bake’s Place with Greta Matassa. Tell me about working with Greta.

I love working with her. She’s a wonderful singer and a great human being. We first worked together last October. We were both aware of each other but never had a chance to work together. Last fall, Nich Anderson had the idea that we should work together. We did one of his house concerts on Camano Island on a Friday night. That was great fun. Then we did Bake’s on that Saturday and Sunday. We had so much fun, we decided to do it again. We just hit it off. She’s a nifty lady and a wonderful singer. We just had a ball. I love to accompany singers. Over the years, I’ve worked with Anita O’Day, Rebecca Parris, Sheila Jordon, Carol Sloane….

Who were some of your influences?

As a pianist, my biggest influence, of course, was Bill Evans. I listen to mainly instrumentalists: Wayne Shorter, Miles, Cannonball Adderley, you know, all those jazz greats. That’s how I learned most of my musical repertoire was listening to them.

Are there any up and coming young jazz artists that you’re excited about?

There are some really nice ones. For pianists, I love Eldar. There’s also a young vibes player- Christian Tamburr that I met at a jazz club in Coco Beach. When he was 16, he would come in. His parents would bring him in. We had a jam session and he would come in and play. You could tell he was really something special.

What’s coming up for you?

My new CD “Dedicated To” that I recorded in Italy just came out. I recorded it with my Italian trio: Giovanni Sanguineti on bass and Giovanni Gullino on drums. Special guest was tenor player Scott Hamilton. I will be going to Italy in July to promote the CD. On May 8th and 9th, I will be in Michigan. On that Friday, I will be playing at the Firefly in Ann Arbor. On Saturday night, I will be playing a house concert for the Detroit Groove Society in the home of Andy and Diane Rossman. Paul Keller will be playing bass with me. Pete Siers is the drummer. On June 13th, I will be playing a concert at the Sanchez Concert Hall in Pacifica, CA in the Bay Area. I will be working with Ruth Davies, a great lady bass player out there.

For information about Bake’s and this weekend’s shows, go to:
bakesplace.org