A Note From Lonnie Plaxico About His New CD

SOURCE: ALL ABOUT JAZZ PUBLICITY
May 16, 2007
Sign in to view read count 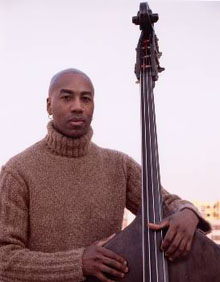 slideshow
I was excited when Blue Note Records offered me a contract in 2001. Blue Note Records released my CD Melange in August 2001--one month before 9-11. This was a difficult time for many artists around the world due to the overwhelming tragedies. The Melange CD sales did not go well during this time of grief, but this did not stop my dream of being a bandleader. My manager was Hitomi Kakuda, and she arranged a two-week tour in Japan and a Rising Star tour in Germany. The tours were successful and my group became known to many in Japan and in Europe. I did not ask for assistance from Blue Note Records during these tours--I wanted to display what I was willing to do in order to present my music and my group. Unfortunately, Blue Note Records decided to discontinue my contract in 2002. I decided to take matters into my own hands as I was very pleased with the amazing musicians in my group and wanted to record a live CD with hope to gain another recording deal. My group for this CD consisted of many great musicians such as Marcus Strickland, who still in college attending The New York School of Music, and Jeremy Pelt, who I first heard performing at Berklee College of Music while I was on tour with Cassandra Wilson. I had heard wonderful things about George Colligan from Gary Thomas years ago. I contacted Nathaniel Townsley because my original drummer Lionel Cordew was not available. We had a startling sound.

I decided to record two live CDs: Lonnie Plaxico Group Live At The Zinc Bar in New York, and Lonnie Plaxico Live At The 5:01 Jazz Bar in Columbus Ohio. I started my own record label, Plaxmusic, after receiving letters of rejections from other labels. I released the 5:01 set in August 2002, and also made a video of that performance. Village Records in Japan was sufficiently impressed by it to offer me a contract, which resulted in two recordings. These recordings were Lonnie Plaxico Group Live at the Jazz Standard (2003) and So Alive (2004). Sirroco Records also saw the video of the 5:01 performance and offered me a contract, and I recorded one CD for them entitled Rhythm and Soul in January 2003. The latest CD I released on Plaxmusic label was Westside Stories in April 2006. I decided to finally release Lonnie Plaxico Group Live At The Zinc Bar because I wanted to share with my first group--Jeremy and Marcus who are now leading their own bands, Jeremy is also recording on Max-Jazz label and Marcus and his brother E.J. have their own label, Strick Muzik. George performs with many bands in NYC and is creating many CDs with his band.

I hope you enjoy the music as well as the musicians on this CD. We performed as a group for two years prior to the live recording. On the song “Too Young to Go Steady," Marcus sounded as mature as anyone that I've ever heard playing a ballad. Jeremy reminded me of the great trumpet masters Lee Morgan and Freddie Hubbard on the song “Old Folks." I cannot say enough about Nate and George. I love the way they performed on “Squib Cakes" and throughout the entire CD. Please enjoy Lonnie Plaxico Live At The Zinc Bar.