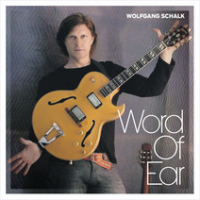 slideshow
Wolfgang Schalk's latest release Word of Ear further showcases his talent as a consummate guitarist, playing with deep soulfulness and feeling. He delivers hard swinging and emotive compositions in the vein of the patriarchal jazz guitarist lineage while highlighting his membership in the elite club of today's creative voices.

Yet, in contrast to the familiar term “word of mouth," it is the music that speaks with its unique yet familiar language. This embodies the essence of Word of Ear as Schalk reaffirms that “jazz is one of the deepest art-forms."

These concepts are fully realized within the recording's nine tracks, beginning with the beautiful solo guitar improvisation “Midnight Prayers" which was created at the end of a late night studio recording session. Other lucid examples include up-tempo burners “Eating Melodies" and “Written Tomorrow", where Schalk's musicianship is illuminated on both electric and nylon-string guitar. Or the tender balladry of “Toninho", dedicated to the influential Brazilian guitarist Toninho Horta. In each performance the musicians find a harmonious plane of communication, creating music that is progressive yet personal.

Whether bringing a fresh, uplifting re-imagining to Thelonious Monk's “Round Midnight" or providing fireworks in the blues-tinged original “Blues ’n’ Roll", Wolfgang Schalk's Word of Ear fluently speaks the art of jazz showcasing one of today's most gifted guitarists.