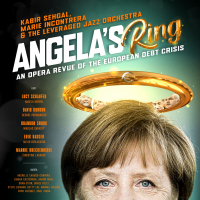 The mere thought of a jazz opera based on the European debt crisis might be enough to send potential listeners running for the exits, but Angela's Ring, a new work co-composed by bassist Kabir Sehgal and pianist Marie Incontrera, is an entertaining and enlightening view of recent history perfectly set to a unique hybrid genre.

Uniting the diverse countries of Europe through a common currency was an audacious idea from the start. Many of the countries had been at war with each other a few decades earlier and combining the various economies of those countries was fraught with danger. The unstable Greek economy became the Euro’s Achilles Heel, and Greece required two separate multi-billion Euro bailouts. In 2011, Kabir Sehgal was working in New York City as an investment banker. As he saw the crisis unfold, he realized that one reason for the myriad problems was that all of the principal players came from different countries, had different cultures, and represented different constituencies. It’s during the European Debt Crisis that questions regarding the very nature of Europe came under brighter lights, with some countries such as the United Kingdom eventually opting for “Brexit.”

A battle of ideologies has also raged for many years in American music colleges and conservatories. Instrumentalists pursuing performance degrees in classical music were discouraged from participating in jazz ensembles, while vocalists exploring the world of opera were expressly forbidden to sing in vocal jazz choirs. The professors of the time claimed that playing jazz could damage techniques or in extreme cases, the voice itself. Such beliefs are less prevalent now, with overwhelming proof that jazz musicians frequently enjoy longer careers than their classical counterparts, and that many jazz icons produced their finest works late in life (for example, Benny Carter, Sarah Vaughan, Gerald Wilson and Tony Bennett).

Sehgal, also a renowned jazz bassist and multi-Grammy award-winning producer, knew that many professional musicians had equal mastery of classical and jazz styles. The original version of ANGELA’S RING, created in 2015 by Sehgal, Incontrera and producer HERSCHEL GARFEIN, was primarily a classical work, but after a performance before an invited audience in Manhattan, Sehgal and Incontrera decided to rewrite the work, using Garfein’s suggestion to “write what you know.” For Sehgal, that meant a unique combination of styles, including the technique he used to create melodies from formal speeches on Ted Nash’s Grammy-winning Presidential Suite, the gritty compositions of Carla Bley and Kurt Weill, as well as the progressive orchestrations of Arturo O’Farrill. The result was, in the composer’s words, “an opera with a groove.”

The final recording—due for digital release on March 19, 2021 on the Tiger Turn label—features an extraordinary group of musicians. Grammy Award winner Lucy Schaufer portrays Merkel as a crafty negotiator who can be seductive, unyielding, or generous, depending on circumstances. David Gordon, as the flawed but sympathetic Papandreou, provides dramatic tension as he is pulled between his suffering nation and the seemingly unmovable European Council. Brandon Snook and Erik Bagger present an insecure Nikolas Sarkozy and randy Silvio Berlusconi, while Marnie Breckinridge's remarkably flexible voice turns IMF director Christine Lagarde into an earthbound angel who successfully mediates a solution for the crisis. It may seem surprising that all of the operatically-trained singers adapt to the grooving jazz rhythms, but it would be nearly impossible for them to sing straight against the powerful swing of the all-star Leveraged Jazz Orchestra and guest soloists including Aaron Diehl (piano), Grace Kelly (saxophone), Grammy nominee Manuel Valera (piano), Oran Etkin (clarinet), Edmar Castenada (harp), and Grammy nominee Papo Vazquez (trombone).

Sehgal’s libretto is a model of historical transparency. While admitting that a few details were changed for dramatic purposes, the annotated script includes descriptions of those changes, plus citations for many of the original quotes found verbatim in the text (one particularly outrageous quote from the Italian Prime Minister is notated by Sehgal as “You can’t make this stuff up; Berlusconi indeed said this.”) To further help the uninitiated through the story, Sehgal brings in several actual news anchors to read faux updates which propel the tale: Betty Liu (Bloomberg), Paul Vigna (Wall Street Journal), Melissa Caruso-Cabrera (CNBC), and Steve Liesman (CNBC). Liesman is also featured as a guitarist within the band. One of the news updates leads to the most outrageous scene of the opera. Apparently, one hedge fund manager suggested that Merkel and Papandreou should resolve their differences in the old- fashioned way…in a joust. The ensuing scene finds the principals in full armor, with lances and hobby horses! Nearly as audacious is the early duet, “Let Us Lie Together,” where—in an attempt to get Greece to sign onto the European Council—Merkel seduces Papandreou on a waterbed. The sex is only implied, but the pun is definitely intentional.

To be sure, Angela's Ring is a challenging work, but it is not inaccessible. The mixture of classical and jazz genres can be traced back to Igor Stravinsky’s “Ragtime for 11 Instruments” (1920) and Darius Milhaud’s “Le Création du Monde” (1922-23), and it includes notable works by George Gershwin (1924), Kurt Weill (1929), Red Norvo (1933), Stephane Grappelli and Eddie South (1937) and Eddie Sauter (1940), as well as better-known Third Stream compositions by George Russell, Gunther Schuller, Jimmy Giuffre and John Lewis. The musicians who performed these pieces often struggled to switch between classical and jazz rhythms, but that is not the case today. A more direct link for this opera might be “Nixon in China” by John Adams and Alice Goodman. With the increased virtuosity of today’s jazz and classical musicians, hybrid pieces like “Angela's Ring" should become more common, breaking down the stylistic barriers to create a universal music once described by Duke Ellington as “beyond category.”

Angela's Ring: An Opera Revue of the European Debt Crisis is a dramatic recounting of some of the seminal of the European debt crisis. This is the story of the European debt crisis and how German Chancellor Angela Merkel shoulders the responsibility of saving the euro. But her rigidness and other factors lead to ruin in Greece, and panic spreads to other countries, threatening the very existence of the currency. At the beginning, Merkel and other European officials sign their commitment to the euro. Merkel seduces Greece Prime Minister George Papandreou with the promised riches of joining the Eurozone. After a raucous celebration, Papandreou awakes to a terrible hangover: his country faces a debt crisis. Christine Lagarde, Director of the IMF—cast as a goddess—urges him to be more disciplined. He appeals to Merkel for debt forgiveness, but she demands that Greece implements austerity. Papandreou concedes, and the European leaders bailout Greece. But harsh austerity leads to ruin not only in Greece but endangers Europe itself. After Papandreou’s resignation, Merkel realizes her intransigence, softens her stance, and agrees to additional bailouts. The leaders recommit to the euro, even though it has exposed contradictions at the heart of Europe.

Angela's Ring will be available digitally on March 19, 2021 on Tiger Turn.