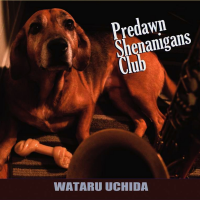 slideshow
Born in Japan, tenor saxophonist Wataru Uchida was compelled by the power of swing to move to New York, only to come under the spell of Latin rhythms such as samba, Baião and Maracatu that form the core of a new release entitled Predawn Shenanigans Club. A specially recruited lineup of Brazilian jazz players bring life to his ten original compositions and give Wataru ample room to shine.

Among many highlights, the title tune, “Predawn Shenanigans Club” contains alternating 3/4 Baião and samba rhythms and a vibrant piano solo by Abelita Mateus. “Bed-Stuy Lullaby" is a relaxed rock tune with Latin touches played in 13 beats. “Black Current" offers an oriental melody that feels right at home on top of a Bolero rhythm.

The album represents a return to the old school one-room recording approach—there is no studio manipulation such as overdub, punch-in, or cut and paste. So each moment represents the real chemistry of jazz interplay.

Wataru Uchida studied saxophone technique and composition with Chico Freeman. Wataru credits Chico with helping him polish his sound, and also with inspiring his first jazz composition, “Black Current," which closes this album.

In 2010, Brazilian bassist Nilson Matta, who had long admired Wataru’s compositional style, produced his first recording, recruiting Brazilian musicians who understood his vision: Romero Lubambo (guitar), Helio Alves (piano), Cafe Da Silva (percussion) and Ze Mauricio (percussion). Blue Morpho was released in 2010 and included originals along with compositions by legendary Brazilian guitarist Baden Powell. Later that year, Wataru was proud to perform at the Museum of the City of New York, supplementing his then-quintet with select New York-based Japanese jazz performers as a part of a series that celebrated the 150 years anniversary of Japan-U.S. trade.

Since then, Wataru has performed with jazz musicians such as Rogerio Boccato, and Fernando Saci. But for Predawn Shenanigans Club, Wataru recruited a special group of musicians. Pianist Abelita Mateus is currently performing with Dizzy Gillespie Afro Cuban Experience in U.S. and Europe and leads her own trio. Bassist Itaiguara Brandao has performed with legends such as Dom Salvador, Paulo Braga, and Paquito D'Rivera. And drummer Vanderlei Pereira has appeared and recorded with Toots Thielemans, Leny Andrade, Tito Puente, Arturo O’Farrill's Afro-Latin Jazz Orchestra, Bebel Gilberto and many more.

The result is a sound that is simultaneously relaxed and invigorating.