Uniquely informed and informative: 'A Jazzman's Tale' is especially and unreservedly recommended for community, college, and university library American Music History and American Biography collections—and a 'must' read for all dedicated jazz fans! —James A. Cox, Midwest Book Review 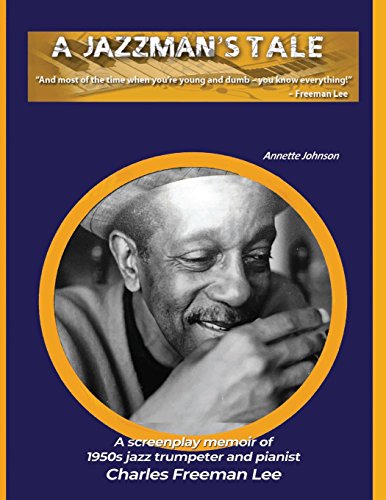 A Jazzman’s Tale about trumpet player Charles Freeman Lee is a heady mélange of a book that starts off with the unique perspective of a screenplay. Part one delves deeply into the gritty life of a jazz musician whose gigging takes him from the Midwest to New York and New Jersey. It segues into a down-and-dirty, honestly spoken interview of Freeman, then wraps a bow around it with a brief study of his collegiate experiences at Wilberforce University and the rich musical history that predated his attendance at the institution.

Author Annette Johnson perfectly captures the tone, tenor and language of the midcentury jazz musician, which provides pointed social commentary about issues like drug abuse, racism, corruption and broken promises, but also shines a light on the brotherhood among musicians, their hijinks and playfulness, and the albeit fleeting rewards of such a life.

This is a fast-moving, highly entertaining and transportive read, visually evocative, demonstrating the disarray of a jazz life with language that echoes the spirit of improv.

Johnson has dug into written and vinyl records as well as photos to come up with this unusual treatment of a jazzman’s life. Not any jazzman, though; the “quintessential” jazzman. She explains.

How did you happen to meet Charles Freeman Lee?

I met Freeman through a South African saxophonist called Jo Malinga. They had gigs together and I knew the saxophonist for a while when he introduced me to Freeman.

Why do you see him as the quintessential Jazzman?

Freeman’s style—cardigan, hat, mannerisms, speech—made me see him as the quintessential jazzman. His language was unique. Plus I often met him in the company of other jazzmen and he just oozed jazz.

It is hard to explain but one night we were in a bar and he was asked to be in a beer commercial by another patron of the bar who worked for a beer company. You had to see him to understand. He looked like a 1950s guy transported to the 1990s and when I asked him about the commercial he laughed and said “I didn’t even have to know how to play the piano, I just had to look like I knew how!”

What resonated the most for you about his coming up into music?

What resonated for me most was the tragedy of his addiction eclipsing his career and his total acceptance of that. He was not regret-laden but accepted that he made unwise choices and offered no excuses, just the facts. Also the range of people he was pals with—Thelonious Monk, Sonny Rollins, Elvin Jones, Jackie McLean, Frank Foster.

His attitude about jazz was totally unpretentious and if I told him I liked his rendition of, say, “Night in Tunisia” during a jam session, he rarely asked for details of why I liked it, he just thought that people liked what they liked and I felt comfortable with him as I did not have to give him a musicological explanation, which I could not do as I have no musical training.

Also he was college-educated and knew a lot about the jazz scene in HBCUs [Historically Black Colleges and Universities] pre-civil rights.

How were you received by him and his family members and colleagues as participants in this story?

His sister, the late Professor Jane Lee Ball, was very happy I took an interest in his life story. She had interviewed him in the 1980s – that interview is in the book – but she was pleased I seemed to be able to relate to the rootlessness of his life as a young musician and that I was totally non-judgmental about his addiction. His family provided me with photographs because they read the manuscript and thought it captured Freeman’s character and attitude about life.

Why did you present it as a screenplay?

I presented the material as a screenplay because I could not find a voice to write about him in prose. Also, there were so many nuances thrown up by his words, I would have had to write paragraphs to capture something that two scenes in a screenplay would show with a lot fewer words.

What was the biggest challenge you faced?

The screenplay format—how to get the dialogue to move the story along and finding the recordings he made with Elmo Hope.

What has happened since its publication—any updates to share?

Since I published the book, there have been no developments.

Are you working on anything new?

I am working on an article about a trombone player but prefer to keep quiet about it until it has developed into something I can get published.

When did you start to write professionally?

I had been writing professionally in my day job as a researcher but this book is my first attempt at a narrative.

I wrote a piece for All About Jazz. called Misterioso here which is a take on the 2016 election and the Misterioso album by Thelonious Monk.

Why jazz, as a subject matter?

I did not consciously choose jazz as a subject matter. When I read the transcript of the interview with Freeman, I simply thought that others should hear about this guy, his insights and experience. And then I read about bebop and decided to write about Freeman who happened to be a jazzman.

Did this book open new doors for you?

The book has not really opened doors to new artists yet. I guess people would have to read it and like my style or my take on the music and people that play it.

I’m inspired to write more about lesser-known musicians who are insightful, valuable contributors to jazz even if they are not necessarily famous.

When the Jazz Arts Group released its Jazz Audience Initiative survey of the jazz market in 2011, the chief outcome was the urgent need to develop new ways of engaging audiences, infusing the art form with new energy and generating ideas for involvement that speak to the younger audience. This survey revealed that a third of younger jazz fans said they were interested in deepening their jazz appreciation. I hope A Jazzman’s Tale will speak to the younger jazz audience whose participation in jazz is crucial for the music to go forward into the future.

I think the bebop era provides a lot of the foundation for the way jazz developed since then. It is a perhaps misunderstood and understudied era of jazz. I am happy that I was able to provide a bit of jazz history in the form of a narrative that is an easy, short read but informative at the same time about aspects of the jazz scene during that era. Jazz history in a story was my goal and I hope I achieved it.