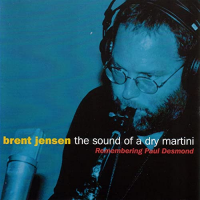 slideshow
Curious about the unannounced and unpromoted reissue of a Brent Jensen album eighteen years after its debut, I asked Origin Records chief John Bishop in Seattle about its reappearance. The CD is Jensen’s The Sound Of A Dry Martini: Remembering Paul Desmond, first issued in 2002. Mr. Bishop replied:

“That record has been popular since it came out, with steady sales and a lot of action on Pandora still happening. Since Brent moved to Seattle, and Jamie Findlay’s up here now too, he’s made it a regular performance thing again. We did a reprint awhile back and were just thinking the (roughly) 20th anniversary is something to marvel at, and thought about all the radio people who weren’t around back then. That was the main push, just seeing how radio would respond and let people know it’s still relevant. It could have easily been a nice little project that then got shelved, but that little pup has legs!”

From the liner notes I wrote for the Jensen album all those years ago, here’s a brief segment about Desmond and Jensen:

“Over the years, Paul created verbal camouflage intended to obscure the fact that he was a master of the instrument. He claimed to have won a special award for quietness. He called himself the John P. Marquand of the alto saxophone. He told me that during his reemergence in the l970s, he tried practicing for a while but ended up playing too fast. None of these evasions fooled Brent Jensen for a minute. He knows what Desmond was made of. In this homage, Jensen succeeds uncannily in marshalling many of Desmond’s essential qualities.”

Below, Jensen demonstrates his grasp of the Desmond essentials by way of his reading of Mercer Ellington’s “Things Ain’t What They Used To Be.”

Origin Records, recorded at The Bakery in North Hollywood, California, in March, 2001.