9 CD Discoveries of the Week 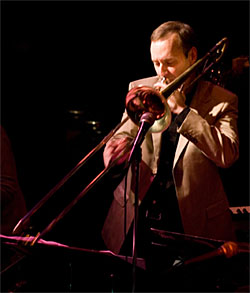 slideshow
I've been traveling quite a bit lately, so my CD discoveries have been piling up. Finally, this past week, I had some time to write about the new albums I love...

Pete McGuinness Jazz Orchestra—Strength in Numbers (Summit). A solid, tasteful big-band album arranged by McGuinness whose writing constantly wriggles the orchestra in and out of interesting places. The combination of flutes and bass clarinet matched against gorgeous trombones that sound like French horns make for a big band recording with a delicate, bold sound.

Abdullah Ibrahim—Mukashi (Sunnyside). The South African pianist-composer taps into his love for Japanese music, combining Asian melodic themes and jazz chords. The result is a captivating and delightfully sensitive solo piano work. Mukashi means “once upon a time" in Japanese, and there's certainly a story-telling feel to each original composition. Now add cellos and woodwinds here and there, and you have one of the finest piano albums of the year thus far.

Rozina Pátkai—Você e Eu. This Hungarian singer delivers sensual renditions of bossa nova classics, including the title track, Desafinado, Chega de Saudade and more. Her surfy nonchalance and passionate lyricism are supported by a superb Rio-like backup group, most notably Balázs Pecze on trumpet and flugelhorn, and Mátyás Tóth on guitar. Hard stuff to sing convincingly, but Pátkai breaks through like the sun after a summer downpour.