The songs sung and played by Carol are a thrill you can only feel and experience with awe! --Rex Reed 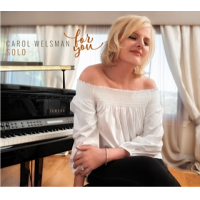 This would come as no surprise to critics and fans alike who have always praised Welsman’s piano/vocal talents. As a result of the success of this album in Japan and by popular demand, Ms. Welsman is turning to her fans and social media to help select the recorded solo tracks from this top selling recording to be included in her forthcoming album release For You. Via a social media event slated to run July 19–August 2nd on Facebook, Twitter, Instagram and her website, Welsman is providing 30 second sound bytes of each of the 23 tracks originally released in Japan, with the overall top 15 selected by those who vote to be included in the For You album release slated for August 18. Everyone partaking will receive an executive producer credit, names of which will be included in the album artwork and the ability to pre-order a signed discounted copy of the final CD. JAZZIZ Magazine will be including the track receiving the most votes in a forthcoming JAZZIZ on Disc Sampler, which is included with their quarterly print editions. JAZZIZ is also making a special subscription offer available to those who vote, which can be accessed on the voting page.

Tracks recorded for consideration include: “Skylark," “Bewitched," “Garota de Ipanema," “Danny Boy," “Besame Mucho," “Autumn Leaves," “Manha da Carnaval," “I Will Wait For You" and “Smile," among others.