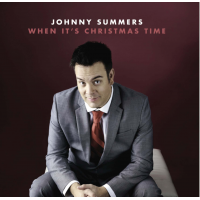 slideshow
Most musicians say they are lovers of great songs, but very few are able to show it in the way that Johnny Summers does! With the new holiday album, Johnny Summers: When It’s Christmas Time, 2015 winner of three Global Music Awards including Best Male Vocalist, Johnny Summers shows why he has become Canada’s best kept musical secret in Jazz.

Hailing from Calgary, Alberta in Canada; for the past 10 years Johnny has been the Artistic Director of the Calgary Jazz Orchestra, a repertory orchestra which is Canada’s only year round performing large jazz ensemble. In this capacity, Johnny Summers has performed as featured trumpet soloist, and conductor during its regular season performances. With When It’s Christmas Time, Johnny continues his musical odyssey in his search of great songs, which began in his series, Piano Sessions Volume 1 & Volume 2, but this time in a holiday setting.

“For a long time I’ve wanted to do an album that was geared towards the spirit of the holiday season.” says Johnny. “This was the perfect time for me to do this project. Since I was a kid, the is time of year has been such a major inspiration to me. From the family gatherings, to the shared meals. From the efforts to support our troops, to the focus on helping those who are less fortunate then we might be. It’s a time of year where everyone’s focus is really on giving, sharing, and being grateful. Those are all ideas that can truly be expressed through music. With the songs I've written for this album, and the classics I've chosen to play, I wanted to just share that sense of joy, of wonder, and of truly being thankful for what we do have.”

SummerTime Music is proud to herald the release of Johnny Summers: When It’s Christmas Time available at your favorite digital or physical retailer world-wide. For more information on Johnny Summers or to request a review copy visit nujazzagency.com or e-mail: [email protected].

Track Listing: 'Zat You Santa Claus?, The Christmas Waltz, Rudolph,the Red-Nosed Reindeer, Long Way to Go, Winter Wonderland, What Are You Doing New Year's Eve?, Baby, It's Cold Outside, When It's Christmas Time, Let It Snow!Let It Snow!Le It Snow!, O Holy Night, I'll Be Home for Christmas.