SOURCE: IMPROVISED COMMUNICATIONS
May 27, 2008
Sign in to view read count 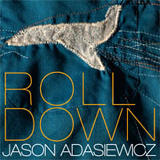 “Vibraphonist Jason Adasiewicz is one of a number of rising new vibe players of particular note," wrote AllAboutJazz.com's Mark F. Turner is his review of Rolldown. “These very strong musicians play to the fullest, with an intense focus that balances improvisation and composition." Other critics added, “The new album is both Adasiewicz's promising first step as a leader and a powerful statement" (Matthew Lurie, Time Out Chicago) and “with Rolldown, Adasiewicz makes it known that in addition to his thrilling performances with others, his own work is equally compelling" (Jay Collins, JazzGram).

A prolific member of Chicago's jazz and improvised music scene, Adasiewicz has earned widespread recognition through his extensive work as a sideman, as well as such high profile honors as his strong showing in the Rising Star Vibes category of DownBeat's 2007 Critics' Poll. He is a member of more than 20 working bands, including the Guillermo Gregorio Trio, Fred Lonberg-Holm's Valentine Trio + 1, Rob Mazurek's Exploding Star Orchestra, the Nicole Mitchell Quartet and Ken Vandermark's Double Quartet. His debut as a leader follows a long association with 482 Music that includes recordings with Aram Shelton's Arrive, Harris Eisenstadt and Mike Reed's Loose Assembly. He also appears on two tracks from the sampler that launched the label's Document Chicago series in 2003.