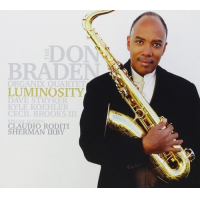 I wish I had more time to review new releases. Unfortunately, my schedule is jam-packed these days and no longer permits the luxury. But over the holidays, I was able to take time out to dig in and let you know about the new albums I had set aside. Hey, better late than never, right? Here are 21 new CDs that I think you'll enjoy...

Don Braden: Luminosity (Creative Perspective). Saxophonist Braden has never sounded better. Backed by an organ trio comprised of Kyle Koehler (org), Dave Stryker (g) and Cecil Brooks III (d), with special guests Claudio Roditi (tr) and Sherman Irby (as), Braden relaxes here and sails through the music, giving the listener a chance to mingle among the notes. The track list includes a delightful twist on Chick Corea's Bud Powell and Braden's own Do Love Me Do, a gorgeous ballad. A delightful jazz exploration.

Nat King Cole: Stardust, the Rare Television Performances (Real Gone). A two-CD set of vocals by pop pre-rock pioneer. The set includes Sweet Lorraine with Coleman Hawkins, Life Is Just a Bowl of Cherries with Billy Eckstine arranged by Shorty Rogers and other winners—35 tracks in all. Most are from Cole's TV show in 1957 plus nine from 1963 while he was on tour in Australia. An impossibly great talent.

George Cables: In Good Company (High Note). Cables remains one of the prettiest jazz pianists around today. Joined by Essiet Essiet (b) and Victor Lewis (d), Cables mixes overlooked gems such as John Hicks' After the Morning and Naima's Love Song with Billy Strayhorn's Lotus Blossom, Lush Life and Day Dream. Cables has a powerful technique but always leaves plenty of room for melodies to grow.

Buddy Johnson: The 100th Anniversary Collection (Jasmine). From 1941 to 1961, Buddy Johnson led a big band that straddled jazz and pop R&B. A songwriter, Johnson wrote and recorded Since I Fell for You in 1946, with his sister Ella Johnson on vocal. This two-CD set features that song as well as an overview of his career. By the late '50s, Johnson's band was Basie-hip and explosive—consider gems such as Small Taste and Going to New York from '59 on Roulette. Music that defied category.

Marlene VerPlanck: The Mood I'm In (Audiophile). While touring in England last March, Marlene squeezed in a recording session with John Pearce (p), Paul Morgan (b), Bobby Worth (d), Mark Nightingale (tb) and Andy Panayi (sax/fl). As is her custom, Marlene took on hip standards that would have made the late Jackie Cain smile. The title track as well as Free and Easy, Certain People and Come on Strong all tell mischievous stories. Marlene swings the high notes here, while a stunningly tasteful quintet frames her perfectly. If you're yearning for spring, this album will catapult you to May in one listen.

John Scofield: Past Present (Impulse). Recorded two years after the tragic passing of John's 26-year-old son, Evan, following a battle with cancer, John digs deep but keeps the music's soul optimistic. He's joined by Joe Lovano (ts), Larry Grenadier (b) and Bill Stewart (d), who are in sync with John's raw emotions and mood. Sample Museum and Mr. Puffy. No wonder this album was just nominated for a Grammy.

Clare Fischer: Out of the Blue (Clavo). Since pianist and arranger Clare Fischer's death in 2012, his son, Brent Fischer, has been doing a spectacular job preserving his father's legacy. On this album, recorded before Clare's passing (there doesn't appear to be a date on the album), Clare (p), Brent (b), Peter Erskine and Mike Shapiro (d) and vocalists Denise Donatelli and John Proulx pour lyrical melody lines and rich counterpoint into a happy cocktail shaker. The spirit of Clare is infused in every track.

Mike LeDonne: AwwlRight! (Savant). I just caught up with this cooker that was released earlier last year. Mike's fingers throw down a groove as if tossing dice. Eric Alexander (ts), Peter Bernstein (g) and Joe Farnsworth (d) add plenty of earthy accompaniment, with Bob Cranshaw (b) and Jeremy Pelt (tr) appearing as special guests. Tracks such as the title song, The Boss and Mary Lou's Blues all move like cats. My fave, though, is Never Can Say Goodbye. I love when organ combos take on '70s hits.

DJ Maestro Presents: Nina Simone, Little Girl Blue Remixed (Naxos). Singer Nina Simone's first album in 1957 was Little Girl Blue, for the Bethlehem label. For this highly inventive album, creative DJs such as Mop Mop, Fab Samperi, Mees Dierdrop and others were invited to update Simone's original tracks with contemporary beats and programs. Unlike most of these types of remix efforts, this album works, largely because the DJs understand Simone's spirit and feed into her melancholy with exquisite results. The original album was great, but this one is a welcome reload.

Melissa Lauren: Your Mess (independent). Vocalist Lauren delivers an eclectic, hard-to-peg album of songs in a style reminiscent of Amy Winehouse. What makes this album special are the delightfully jagged alt-rock arrangements. Sample her Nice Smile and the standard It Could Happen to You. All feel as if a good gal is being chased in a contemporary film noir. But keep your ear on that voice. Sound like someone dancing barefoot on a coral reef.

Joe Magnarelli: Three on Two (Posi-Tone). A gentle hard bop album is always welcome on my end. I love Joe's fleshy, round trumpet tones, which express pure love for the instrument. Here, with Steve Davis (tb), Mike Dirubbo (as), Brian Charette (org) and Rudy Royston (d), “Mags" plays even more beautifully than usual on his own title track, Davis's Easy and Coltrane's Central Park West. Once again, Joe proves that it's not how many notes you play or how hot you blow but whether your heart is along for the ride.

Bobby Shew: Live 1983 (independent). Speaking of beautiful trumpets, Bobby Shew in March 1983 recorded with the University of Florida Jazz Band under the direction of Gary Langford. Bobby has a lovely way of scrambling up and down chords and lingering on notes, pausing where you'd least expect him to. If you love big bands with powdery, peppery trumpet solos, this one's for you.

Gary Peacock Trio: Now This (ECM). Bassist Peacock, a Bill Evans alum, is teamed here with Marc Copland on piano and Joey Baron on drums. This trio is one of the most intuitive and conversational on the scene today. Tracks are mostly originals by Peacock, Copland and Baron, and all flower splendidly in the tradition of the Evans trio. The group also takes on Scott LaFaro's Gloria's Step with contemporary abstraction. An album that will remind you how a jazz trio once sounded when everyone was fully invested emotionally.

Barbara Fasano: Busy Being Free (Human Child). Barbara's vocals on this album retain a jazz aesthetic on a range of familiar standards. Songs such as Dancing in the Dark, But Beautiful and Alec Wilder and Fran Landesman's Photographs are tricky to sing, but Barbara handles them smoothly with smart phrasing and gorgeous accompaniment by John Di Martino (p, arr), Warren Vaché (cornet), Aaron Heick (soprano sax/flute), Paul Meyers (g), Boris Kozlov (b) and Vince Cherico (d).

Kirsten Edkins: Art & Soul (Equipoise). When she plays the tenor saxophone, Edkins has the feel of Stanley Turrentine, especially with organist Larry Goldings behind her. Edkins handles the lower register easily on songs such as Imagineering and Stomping Ground. We also hear her on alto and soprano sax. There's a take- charge tenderness to Edkins' playing that stays with you.

Donald Vega: With Respect to Monty (Resonance). Monty here is Monty Alexander. Pianist Vega, who has toured with Ron Carter, pays tribute to the Jamaican-born Alexander with his trio on songs like Slippery, You Can See and The Gathering. Vega is backed by Anthony Wilson (g), Hasaan Shakur (b) and Lewis Nash (d). A lyrical valentine to Alexander, who is quoted in the press materials as “deeply delighted."

Stacey Kent: Tenderly (Okeh). Another knockout bossa nova album from Kent, this time featuring legendary bossa guitarist and composer Roberto Menescal. Interesting song choices here—including Only Trust Your Heart, Tangerine, If I'm Lucky and Roberto's Agarradinhos. The album is due on Jan. 16, but I figured I'd hip you to it now given how tough it is for me to put these roundups together these days.

Dusty Springfield: Come for a Dream, the U.K. Sessions 1970-1971 (Real Gone). Springfield launched her solo career in 1963. But was she pop? Soul? Or something else entirely? Atlantic wasn't quite sure, but the label signed her anyway in 1968 when her contract at American Philips ended. Long story short, Dusty continued to record for Philips in the U.K., perhaps as a fallback, with the expectation that Atlantic would pick up the results. But Atlantic passed on the U.K. material she recorded for an album between 1970 and '71. Songs include shrewd covers of Song for You and O-o-h Child. Now, the album plus singles and outtakes are available on this new release. With all of her vocal power, Dusty always managed to sound so vulnerable.

Julie London: Lonely Girl (Jasmine). If your London collection is missing her Lonely Girl, Calendar Girl, About the Blues, Julie London (with Jimmy Rowles' orchestra) and her first four singles, here's your chance with this two-CD set. As readers know, I'm a huge London fan, and these albums are a rich introduction to the pop singer whose career was always on the outskirts of town, despite her being on par or better than most of her contemporaries.