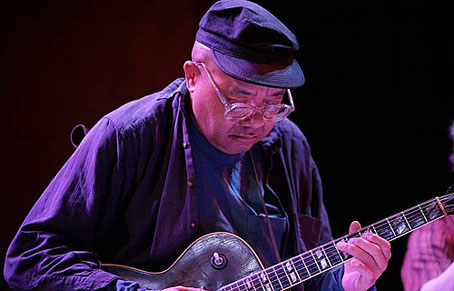 slideshow
Having shaken off holiday torpor and distractions, the Boston area array of gifted musicians roosting at Outpost 186 are shaping their event streams for the beckoning year.

The highlight for January will be a reunion of colleagues from Ornette Coleman's Prime Time, guitarist Bern Nix and keyboardist Dave Bryant with help from Jacob Williams on bass and Eric Rosenthal on drums. This happens on Saturday, January 28th at 8pm with a suggested donation of $10.00.

In the week leading up there will be performances by Steve Lantner and Pandelis Karayorgis ensembles on Tuesday 1/24 and Wednesday 1/25, respectively. Friday 1/27th will see the launch of a long series of topical theme performances invented by oboist and bon vivant, Esther Viola, and her pool of sagacious colleagues.

It is an interesting experiment to see if a warm casual setting and a whimsical array of inquiries will win over hearts and minds in a notable fickle and aloof audience environment. From Ms. Viola herself, we have the following:

“Musicians: Have you ever graced through the aisles of a toy store, spotting various musical instruments on display? Has the temptation of creativity hit you enough that you've banged out a few chords at the toy piano, broken into a beat on “My First Drum Kit," or tried to come up with something... anything interesting on a one octave xylophone in the key of C?

Well, the folks at the Junk Kitchen Concert Series have concocted a remedy for those of you with such childish urges: a musical pursuance that will relieve you of being seen in a toy store and getting kicked out by security. This first installment will feature music written for and improvised on toy instruments and will feature many area performers and special guest Jaggery.

Our mission here is not only to give these instruments their due, but also to pose a challenge to those performing on them. We're going to keep the Jazz Box in its case, and the Mark 7 at home, 'cause this is a night for musicians to get in the zone with the most interesting sounds this side of Christmas."

February will see a resumption of monthly duet concerts crafted by guitarists Sheryl Bailey and Jack Pezanelli and the introduction of a monthly series with Charlie Kohlhase and his august Explorers Club.

Outpost 186 lives at 186 ½ Hampshire st in the heart of redolent Inman Square, Cambridge.