These festivals are my attempt to even things out, between men and women bandleaders. Obviously we have a long way to go, but having women in charge of the music they are presenting helps to change the tone of the jazz culture, for future (and present) composers and leaders. 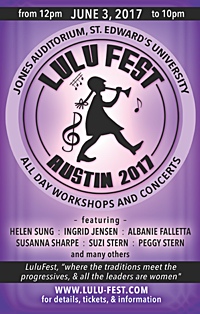 slideshow
Pianist/composer Peggy Stern is passionate about creating opportunities for women bandleaders to present their music. In 2004, she founded the Wall Street Jazz Festival, which was held for 12 consecutive years in Kingston, New York, for exactly that purpose. After relocating to Austin, Texas in the spring of 2013, Stern was inspired to continue the festival’s concept in Austin’s forward-thinking community.

Her new brainchild, the first annual LuluFest, is a women-led band festival that will premiere on Saturday, June 3, with concerts from 5 to 10pm and workshops scheduled throughout the day. The festival, presented by Ritenuto Foundation, Inc., in collaboration with the St. Edward’s University Music Department and founder/artistic director Peggy Stern, will feature a broad spectrum of music—from jazz to Western swing to Latin and Brazilian. The concert series will be held on Saturday, June 3, from 5:00 to 10:00 pm, at the Jones Auditorium in the Ragsdale Center at St. Edward’s University, 3001 S. Congress Avenue, Austin.

The focus of LuluFest will be women bandleaders, both seasoned and up-and-coming, who have committed their lives to music.

“These festivals are my attempt to even things out, between men and women bandleaders,” says Stern. “Obviously we have a long way to go, but having women in charge of the music they are presenting helps to change the tone of the jazz culture, for future (and present) composers and leaders.”

The evening concert schedule is as follows:

Daytime workshops will be instrument specific: Piano (Helen Sung); Trumpet (Ingrid Jensen); Vocals (Suzi Stern); Drums (Masumi Jones). From 12 to 1:30pm, the workshops will take place in St. Edward’s University’s Carriage House, and from 2 to 3:30pm, a master class will be held in the Jones Auditorium.

Workshop passes can be bought separately at $30 for adults and $15 for students, or interested musicians can buy a festival pass for $50 that grant access to both the workshops and concerts.

More information about the artists, the concept of the Festival, and fees and directions can be found at www.lulu-fest.com. This project is supported in part by the Cultural Arts Division of the City of Austin Economic Development Department.

Pianist/composer and native Philadelphian Peggy Stern lived, worked, and taught in New York, Boston, San Francisco, and Seattle, and toured widely throughout Europe, the U.S., Canada, Australia, and Japan, before relocating to Austin in 2013. Her music has a particularly broad ethnic base—in addition to European and American classical music, it draws from Brazilian, African, Jewish, Irish, Cuban, and traditional jazz influences. Joining the vibrant music scene in her new home city, she intends to create a new (for her) musical genre, which she calls Cowboy Jazz.

“It has been 16 years since Peggy Stern last applied her piano, composing and arranging talents to a mid-sized ensemble. Z Octet was worth waiting for... Stern’s writing weaves piano, clarinet, cello, trombone, flute, bass and drums into rich and often surprising textures... The CD ends with an unlisted bonus track that makes enchanting use of cello, trombone and flute. The whole album is a bonus.” –-Doug Ramsey, Rifftides

“This is Duke Ellington’s brilliance, Maria Schneider’s local color, and Miles Davis’ diamond hard seriousness all melded and tempered by a singular mind and talent into a cogent and familiar musical statement.” –-C. Michael Bailey, All About Jazz

“Peggy Stern has taken from her experiences playing in the bands of Eddie Henderson, Machito and Lee Konitz to weave a very special tapestry of indefinable music that bobs and weaves like a boxer named Ali.” –-Mike Greenblatt, Classicalite

“This is music possessed of great explosions, bristling rhythms, dynamic contrasts starkly illuminated, and with unrelenting dramatic thrust. It is a record to die for.” –-Raul da Gama, Jazz da Gama