SOURCE: PAT COURTEMANCHE
May 30, 2009
Sign in to view read count 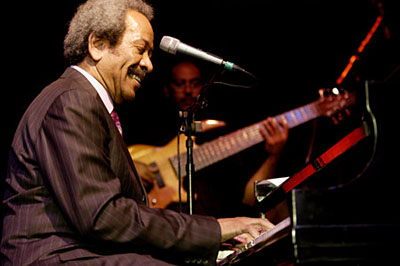 slideshow
Allen Toussaint, Esperanza Spalding, The New Standards and many more to perform at free outdoor concerts in Mears Park in Saint Paul.

St. Paul/Minneapolis, MN -- The jazz festival that almost wasn't has announced an exciting lineup for its 2009 edition. The Twin Cities Jazz Festival was so hard pressed to secure adequate sponsorship money for its 11th annual event that organizers were prepared to cancel the event in 2009 and attempt to return in 2010. Through eleventh-hour efforts and the generosity of sponsors that did not want to see this Twin Cities tradition falter, the Twin Cities Jazz Festival will return on June 18, 19 & 20, 2009. Although the Festival will cover fewer days than its usual two-week run, the lineup promises to make it one of the most potent in the events history. New Orleans R&B legend Allen Toussaint headlines the Friday, June 19 free concert in Mears Park in downtown Saint Paul. The Mears Park lineup on Saturday, June 20, includes 24 year-old bass and vocal sensation Esperanza Spalding and the Twin Cities-based group The New Standards.

Other highlights include a Jazz Night Out club crawl on Thursday, June 18 featuring over 15 clubs in downtown Saint Paul (benefitting the St. Paul Festival and Heritage Foundation), a Mears Park performance by Chastity Brown on Jazz Night Out, a performance by Twin Cities sax master Irv Williams (and a celebration as he approaches his 90th birthday), the return of young sax wiz Alex Han and piano man Jon Weber, performances at the Artists' Quarter jazz club and the Hat Trick Lounge, and more. The entire 2009 Twin Cities Jazz Festival will take place in downtown Saint Paul. All of the concerts in Mears Park are free admission. For more information, visit TwinCitiesJazzFestival.com.

Allen Toussaint is the first member of the Rock and Roll Hall of Fame to appear at the Twin Cities Jazz Festival. Whether you call him jazz, R&B, rock or some other label, this New Orleans singer, songwriter, pianist, producer and arranger is simply a musician's musician. Dating back to the early 1960s, Toussaint was one of the key architects of the New Orleans sound. His early songs were recorded by greats like Irma Thomas and Aaron Neville. His songs have been covered by everyone from Glen Campbell (Southern Nights) to the Rolling Stones to Robert Plant and Alison Krauss. Toussaint's 2006 CD collaboration with Elvis Costello, The River in Reverse, was a reflection on Hurricane Katrina. His latest release, “The Bright Mississippi" on Nonesuch, finds Toussaint embracing great jazz from the early 20th century.

Esperanza Spalding is a 24 year-old bassist, singer and composer who was raised in a multi-lingual house and neighborhood in Portland, OR. At age 4 she was so inspired by a Yo-Yo Ma performance on Mr. Rogers Neighborhood, that she knew right then that she wanted to pursue music. She eventually attended Berklee College of Music, and at age 20 became the schools youngest faculty member ever. Her jazz is infused with elements of funk, blues, hip-hop, Afro Cuban and more. This is a young star on the rise. The New Standards features Chan Poling, John Munson and Steve Roehm performing jazzed-out versions of songs by artists as diverse as The Replacements, OutKast and The Velvet Underground. First appearing at the Festival in 2005, Alex Han wowed the crowds with his amazing saxophone skills. Han is only age 21, and he has already made a big impression in the world of jazz.

See the Festival's website at TwinCitiesJazzFestival.com for complete listings of performances.

Visual Jazz. Visual Jazz returns to the Twin Cities Jazz Festival with an opening reception on Wednesday, June 17 at the Grand Hand Gallery on historic Grand Avenue in Saint Paul. Noted Saint Paul artist (and jazz fan) Seitu Jones is the guest curator for the Visual Jazz exhibit, and he will be on hand along with other exhibiting artists at the Opening Party. Live music, wine, hors doeuvres and jazz-inspired art will all be part of this kickoff event. The Visual Jazz exhibit runs through July 8, 2009 at the Grand Hand Gallery. Visit thegrandhand.com for more information.

Support and Sponsors. Many non-profit civic events have found difficulty raising necessary sponsorship money in the currently-stressed economy. The Twin Cities Jazz Festival is no exception, and despite vigorous efforts to raise money it appeared that the event would not take place in 2009. The office of Saint Paul Mayor Chris Coleman, including Director of Arts and Culture Joe Spencer, showed real leadership by setting a vision for a new path to financial viability. The Mayors office was crucial in bringing people together to build logistical and financial support critical to the event. Returning sponsor Northwestern Foods, major new sponsor TDS Metrocom, the Lowertown Future Fund of The Saint Paul Foundation, several Saint Paul businesses and the St. Paul Festival and Heritage Foundation also stepped in to help save the day. The additional businesses that are sponsoring the festival include Barrio, The Black Dog Caf, The Bulldog, The Hat Trick Lounge, Rumours & Innuendo, Senor Wong, Station 4, and Trattoria da Vinci. This coalition of Lowertown businesses banded together to help bring the Twin Cities Jazz Festival back to their neighborhood.