As a pre-celebration of the 10-year anniversary of the label in 2020, Whirlwind Recordings announces ten new limited edition vinyl releases. 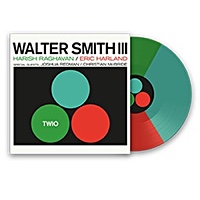 Whirlwind is delighted to dig into their back catalog and make available for the first time a limited edition printing of First Meeting: Live in London Volume 1, by Lee Konitz, Dan Tepfer, Michael Janisch and Jeff Williams. One of the label's all-time most popular releases, this new double LP with gatefold artwork features the entire album recorded live in London across 4 sides of music on 180 gram, Purple Vinyl. This is a one time printing and will certainly become a collector’s item.

By popular demand, a second and final printing of Walter Smith III’s TWIO is available to order after the first edition sold out in no time. This second printing features 180 gram, TRI-Color Vinyl, which again will become a collector’s item, so order quick before this one goes. Also featuring Eric Harland, Harish Raghavan, Joshua Redman and Christian McBride.

Unfiltered Universe was one of the jazz world’s biggest releases in 2017—and there has been plenty of interest for this in vinyl. This limited edition, double LP with gatefold artwork at 180 gram by world-renowned guitarist and composer Rez Abbasi features Vijay Iyer, alto saxophonist Rudresh Mahanthappa, bassist Johannes Weidenmueller and drummer Dan Weiss, plus guest appearances from renowned classical cellist Elizabeth Mikhael.

With an authority developed over two decades on the circuit, UK-cult band Partisans are proud to unleash their first live album and their first LP, Nit De Nit, recorded at London’s Vortex Club. Across this rezzed-up hour-plus of back-catalogue reinventions and new delights, electric guitarist Phil Robson, saxophonist Julian Siegel, electric bassist Thaddeus Kelly and drummer Gene Calderazzo command the stage with inimitable joie de vivre. Fans of Partisans have been asking for vinyl for years so we’re very excited to present this. (12″ 180 gram)

Bloom is the the first LP release from legendary drummer Jeff Williams, and his fifth album for Whirlwind. It speaks volumes when the bustling opening track his new piano trio release is revealed as “just us warming up, getting our headphone mix together”! For that’s the remarkable, spontaneous quality which his partnership with pianist Carmen Staaf and double bassist Michael Formanek delivers across ten numbers individually penned by each, plus a Buster Williams interpretation. (12″, 180 gram LP)

The contemporary sound is strong in this sparkling, eponymous debut from new European quartet SCOPES, led by Austrian drummer Mathias Ruppnig and German bassist Tom Berkmann. Originally meeting up when based in New York for several years, performing there in various projects with French pianist/keyboardist Tony Tixier, they created the basis of a striking collaboration completed by acclaimed Dutch alto saxophonist Ben van Gelder. (12″ 180 gram)

Another back catalog item, Fistfight At The Barndance is a 4-sided, double LP at 180 grams in gatefold artwork by The Gareth Lockrane Big Band. In his most ambitious artistic undertaking yet, respected British flautist, composer and educator Lockrane brought his debut big band project to Whirlwind to interpret eleven original works on an exciting, cinematic scale. Known for his considerable work with smaller ensembles such as Grooveyard (with saxophonist Alex Garnett), as well as being a familiar sideman on the UK scene, here Lockrane distils all of his experience into leading a 20-piece which sparkles with ebullient expression.

El Mar de Nubes is the first LP release from British saxophonist Tori Freestone. The natural phenomenon of the Canary Islands’ ‘sea of clouds’ is an exhilarating experience—a highland ascent which rewards with views across the shifting stratocumulus ocean surrounding El Teide (the highest point in Spain) and her neighboring summits. It’s a landscape which has proved endlessly inspirational for Freestone, and a special impetus for El Mar de Nubes, her third trio album with double bassist Dave Manington and drummer Tim Giles. (12″ 180 gram)

The passion and energy in the performances of Brazilian harmonicist Gabriel Grossi are as crystal clear as the sounds and atmospheres he produces from one of the smallest yet evocative instruments on the bandstand. Described by legendary Toots Thielemans as his successor, Grossi’s many collaborations have included Chico Buarque, Ivan Lins, Guinga and Snarky Puppy. Now he releases his first live album, #motion, on Whirlwind, and his first 180 gram LP—a joyous celebration of his career to date, dedicated to those he loves, featuring his latest quintet: trombonist Sergio Coelho, pianist Eduardo Farias, bassist André Vasconcellos and drummer Rafael Barata. Guest appearances including celebrated fellow countryman Hermeto Pascoal.

One of the most popular of recent releases on Whirlwind, and now with a sold out first LP printing, a second and final pressing of In Common by Walter Smith III and guitarist Matthew Stevens is available in 180 gram, Yellow Vinyl, another collector’s item. Together with vibraphonist Joel Ross, bassist Harish Raghavan and drummer Marcus Gilmore, they fashion striking improvisations from original compositional foundations.